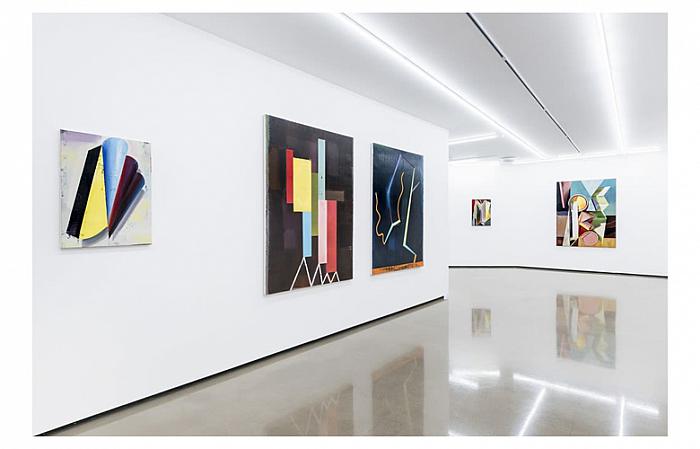 Beers London is proud to announce a new exhibition of works by Genti Korini, whom we successfully exhibited at ZONA MACO art fair in Mexico earlier this year.

Featuring work from 2017 and late 2016, Korini continues to explore the manner in which forms are created and how their cultural backgrounds and social contexts shape them. The works are greatly informed by the architecture Korini’s hometown of Tirana, Albania, as it was (re)shaped during the 1980s and 1990s. Evoking turn-of-the-century art movements such as Constructivism, Modernism and Suprematism, it is no mistake that Genti’s works remind the viewer of imagined eastern bloc architecture; these are representations of the monolithic structures and the often impossible, geometric forms intended to mirror early 20th century utopian ideals. Unlike some of the Modernist works that inspire him, Korini imbues his paintings with a unique sense of forceful dynamism and divergent dimensionality through his use of colour, shape, and line.

Decorative aspects of buildings, urban spaces and the new architecture itself are hereby represented as a visual facet of the larger language of expression, which is intrinsically connected to the imaginary dimension of power (its dream-space or virtual space). Korini’s examination of this trend reverberates throughout his works from inception to completion, he builds upon the composition with cumulative layers of color that mirror the ever-changing nature of social, political, and economic landscapes of his youth.

Providing the bulk of this show will be new works from his ‘Structure’ series. These newer works are both flatter, but with a rougher surface texture than his earlier offerings, perhaps to more directly reference the crumbling architectural facades – both real and imagined. In many ways, Korini’s oeuvre has evolved with the ever-changing political climate. With contemporary world politics seeming tumultuous at best, the forms that Genti has depicted have become less probable, unsure of their own capability as freestanding structures. Some seem certain to topple at any given moment, whilst others use inverted senses of perspective that confuse the eye. Korini’s painterly process begins with drafting digital mock-ups using an iPad, and we see a certain developing language that is comprised of repetition of shapes, lines, colours, and even textures that tend to repeat themselves throughout any number of paintings. His overarching concept of manipulating form through this digital process is continued here, and raises the question of how the democratisation of architecture design, through the availability of computer aided technology, has allowed the development of a new visual language.

GENTI KORINI (b. 1979) holds an MFA in painting from the University of Arts in Tiran, Albania (2002) and has also studied at the University of the Art and Design from Cluj-Napoca in Romania. Korini has exhibited extensively including the following solo exhibitions; Inside My Walls I See Yours (2015) at Martin Asbaek Gallery in Copenhagen; The Object and Its Background (2014) with Jecza Gallery in Romania and Ephemeral Structures (2013) at the National Gallery of Art in Tirana. Group exhibitions include Homage – Ideal or Pattern? (2016) at Knoll Gallery in Vienna, Shape of Time – Future of Nostalgia (2016), National Museum of Contemporary Art (MNAC) in Bucharest; Art Encounters Biennale (2015) in Timisoara, Mona (2015) at 68 Projects in Berlin; Fragile Sense of Hope (2014) Me Collectors Room in Berlin among others. Korini has also exhibited at a variety of international art fairs, recently ZONA MACO with Beers London (2017). Artist residencies include CCA Andratx in Palma de Mallorca (2017); ISCP International Studio & Curatorial Program in New York (2015); as well as Autocenter Summer Academy in Berlin (2013).