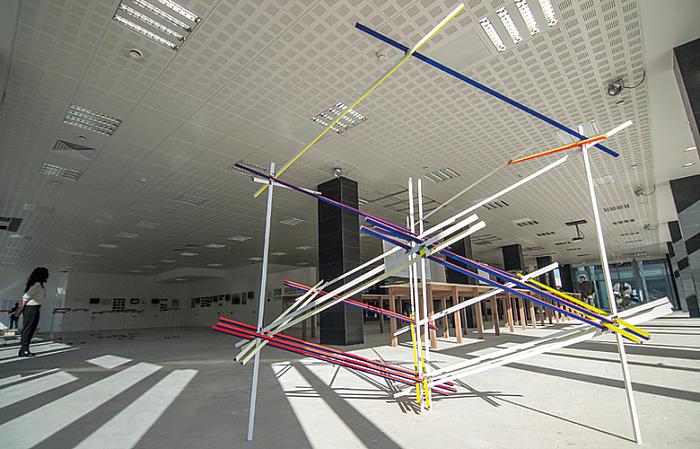 The exhibition is organised and produced by the Romanian Chamber of Architects – Timiș Branch in the framework of the project Art Encounters, Timișoara. In cooperation with: The Art Encounters Foundation, Triade Foundation, Jecza Gallery and the Museum of Art Timișoara.

Cartography of Learning 1969–1983 is the first attempt to describe the ambitious project of pedagogical experimentation in art, design and architecture by the SIGMA group. Founded in 1969 in Timișoara by artists Ștefan Bertalan, Constantin Flondor, Ioan Gaita, Elisei Rusu, Doru Tulcan and mathematician Lucian Codreanu, SIGMA’s artistic concept was driven by their interests in systemic thinking, visual communication, and advanced technology, combined with an extended reinterpretation of early 20th-century constructivism and an alliance with conceptualism and radical education. As a comprehensive platform, SIGMA’s artistic practice became an influential model for a diverse array of practitioners in art, design and architecture.

The exhibition retraces SIGMA’s process-based approach to art in relationship to the theories of learning they tested at Timișoara High School of Arts from 1969 to 1983, extended to the School of Architecture (1970–1981) by Bertalan and Flondor and to the Electrotechnical Faculty (1971–1972) by Codreanu and Gaita. The strong interdisciplinary character of SIGMA’s work, which radically juxtaposed diverse theoretical references—constructivism, cybernetics, bionics, mathematics, structuralism, semiotics, psychoanalysis, and Taoist physics—marked a significant detour in the institutional stance towards learning that was traditional in Romania at the time. They fostered, rather, a more nuanced and experiential type of curriculum in art, product design and architecture, echoing the visionary pedagogy of the Bauhaus, Paul Klee, and Buckminster Fuller. SIGMA re-imagined the school as a relational and situational site, where education would be a continuous process of learning and open-ended experimentation.

Given SIGMA’s deep interest in science and its profound connection to their unique teaching program, the exhibition aims to expose a cartography of unmapped narratives, sources and viewpoints which unfold new readings and lesser known aspects of the group. It also asserts that SIGMA’s pedagogical principles still hold relevance today, considering the flexible boundaries they developed between educator and artist, teacher and student, between institutional space and nature, art object and its context.

SIGMA: Cartography of Learning 1969–1983 brings together a selection of works and archival material related to SIGMA as an artistic group and as teachers, ranging from photographs, films and drawings to original objects, reconstructions, (note)books and writings by artists, along with student works.

The exhibition develops along three concept-lines displayed in modular structures: Algorithmic Objects: From Spatial Structures to Process Design, Architectures of Space: Game, Action, Experiment and Sensible Acts of Perception. The three exhibition-lines construct a visual montage that finds continuation in a workshop and symposium, where the participants will enact different formats and themes of SIGMA practice and creative pedagogy for contemporary study. Seeking to contextualize and reread SIGMA legacy from today’s educational and cultural realities, the workshop will generate a collective manual, a possible contemporary reinterpretation of the phenomenon of SIGMA as collaborators, educators, and interdisciplinary artistic practitioners.