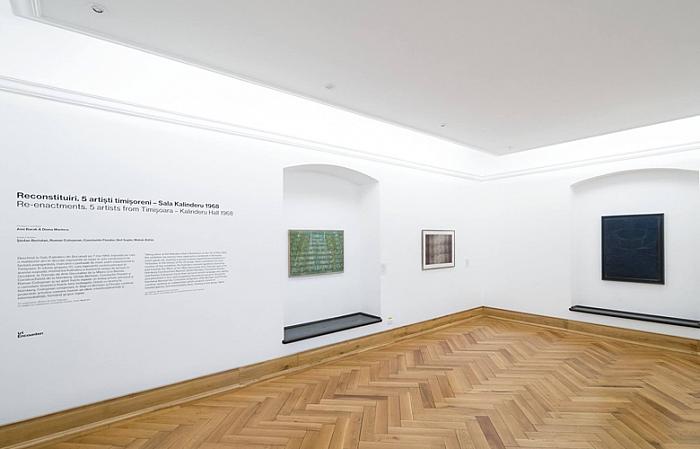 The history of art “translated” through exhibition landmarks is significant in order to show how the novative energy of artists has changed the course of art, influenced trends, and changed perceptions on any one artistic context. The history of exhibitions is, perhaps, “the most repressed cultural history”, as Mary Anne Staniszewski suggests, and one of the methods successfully adopted nowadays by the great museums of the world is based on the reintroduction of historic exhibitions to public awareness through their reenactment. In this context, and considering the important role played by the abstract-constructivist historic exhibition 5 artists from Timișoara, we aim to bring it back to the present, hosted by the Timișoara Museum of Art.

Opened at the Kalinderu Hall in Bucharest, on the 7th of May 1968, this exhibition represents a landmark in Romanian avantgarde art, as it enjoyed abundant critiques and it signaled a period of great experimental momentum in Timișoara. Also, among the visitors at the exhibition were the French delegation, and the cultural attaché of the French Embassy, while they were in Bucharest for a French exhibition at the National Museum of Art.

In the history of the 111 group, which constitutes the main nucleus of this exhibition, the Kalinderu moment signified a launching pad towards the West, at the Milan Decorative Arts Triennial (autumn 1968), and one year later, at the Nürnberg Constructivist Biennial, and then at the Sonja Henie – Niels Onstad Foundation in Oslo. All of these contributions were very well received. The 111 Group, founded in 1966, focused on the study of the principles of constructivism, and the Bauhaus School model. Its members – Ștefan Bertalan, Constantin Flondor and Roman Cotoșman – found their personal artistic language very quickly, and presented a very well coagulated theoretical research, strengthened by a close friendship. During the Nürnberg Biennial trip, Cotoșman emigrates, while Bertalan and Flondor continue working on common artistic projects, based on interdisciplinary and inter-medium ideas, forming a new group – Sigma – which will include Doru Tulcan, Ion Gaita, Elisa Rusu and Lucian Codreanu (a mathematician).

Eugen Schileru wrote with great enthusiasm in Contemporanul, shortly after the opening night of the exhibition: “A group of young artists from Timișoara – Ștefan Bertalan, Roman Cotoșman, Constantin Străinu-Flondor – is exhibiting today, in the hall of the former Kalinderu Museum, the results of a first step taken on this road of an increasing proximity between art and science. Their works are the manifestation of a tenacious and continuous effort of gathering information. […] The fact that the three young artists from Timișoara are now orbiting the aforementioned currents [optical and kinetic art] shows an accomplished desire of self-discipline. Their variable geometries, which enchant the eye, show their aspiration towards perfect shapes, towards superior discipline. […] The other two participants in the exhibition, Dietrich Sayler and Zoltán Molnár, work towards other vectors of abstractionism. The first practices a geometricizing abstractionism, seeking to suggest space and movement through established relationships between geometric shapes; the latter is more attracted by a lyrical abstractionism, in which the memory of the real remains, or more specifically, of the botanical, stylized in grand, poetic shapes (sometimes recalling Bram van Velde).”

Ștefan Bertalan (1930-2014), a founding member of the 111 Group, with Roman Cotoșman and Constantin Flondor, and of the Sigma group, in 1970, had an artistic activity deeply connected with the particular interest he had for new mediums and new materials, being one of the first members to experiment with these (ever since the 111 Group period). Another interesting aspect of his career was his ability to combine bionics and geometry, with actions organized in nature, in Timișoara, during his time in the Sigma Group: Benzi tensionate peste Timiș (Tense bands over Timiș), Acțiune Dracșina (Dracșina Action) or Leonardo. Spectacol pentru public (Leonardo. Public show). This ecological interest he had for nature (particularly visible in his action at the Kalinderu Gallery in 1979, Am trăit 130 de zile cu o plantă de floarea soarelui (I lived for 130 days with a sunflower plant) can be regarded, to a degree, as an influence of German artist Joseph Beuys’ artistic activity.

Roman Cotoșman (1935-2006), member and cofounder of the 111 Group, will develop his artistic activity in close connection with the constructivist and kinetic principles of the group. After the 1968 exhibition at Kalinderu, Cotoșman will exhibit works at the Nürnberg Biennial, and will the emigrate to Germany, and later to the United States. His investigations in the sphere of abstract art will tend towards a formalist, detailed analysis of the geometry so prevalent in the 111 Group’s activity. Upon leaving the group, Cotoșman’s artistic interests will also change – he will gravitate towards a more abstract-minimalist aesthetic.

Molnár Zoltán (1937-2009) staked his artistic activity on a non-figurative approach, inspired by nature, which metamorphosed elements of the real world in painting. The rigor and geometricity characteristic of constructivism will have strong echoes in his painting, as his way of working tried to harmonize clear shapes, well-defined rhythms, and refined chromatics. As proof of this, the artist invoked connections of his work with two areas of knowledge which are quintessentially abstract: mathematics and music. His activity also includes graphical works, developed during the 1970s, in collaborations with the Hungarian State Theatre and the National Opera in Timișoara.

Diet Sayler (b. 1939) was also influenced by the constructivist movement, which led him, very early on, to solutions characterizing abstract and concrete art. His austere abstract resolutions and his rigorous geometricity recall a spartan color palette. His explorations are also connected to the sphere of installation, such as in the case of the ambient the artist created in 1972, in Pitești – mirrors and lighting effect set to music by John Cage. After a short while, in 1973, he will emigrate to Germany, where he was allowed to continue his artistic explorations without difficulty, escaping the pressure of communist ideology. Even though he will eventually distance himself from certain utopian aspects, the influence of constructivist art, particularly under the banner of Malevich, and that of concrete art, will continue to be felt in his creation.

Constantin Flondor (b. 1936), member and cofounder of the 111 Group, as well as the Sigma group, found the sources of his reflections on the limit between the reality of creation and the objective reality, in nature and time. His artistic endeavor will be characterized by analytical attention, focused on the observation of nature, and translated into his works through the mediation of geometry. Thus, the natural randomness ends up being recorded in a decidedly rigorous and technical way, as his Solarograms, developed in 1976, attest. He will eventually integrate new media in his artistic practice (photography, film), initially as a form of documentation, then as stand-alone artistic media. An important part of his artistic activity will consist of his actions undertaken with the pupils of the Art High School in Timișoara, where, along with his colleagues in the Sigma group, he managed to impose a new pedagogical methodology.

The artistic medium in Timișoara during the 1960-1980 interval represented a reference point, distancing itself from academic conformity and from the compromises piled up during a suffocating, oppressive regime. After the resounding success of the Kalinderu exhibition in 1968, the U.A.P. Art Critic Department proposes that the 111 Group would participate at the Nürnberg Constructivist Art Biennial in 1969, along with two other artists, from Bucharest (Pavel Ilie and Mihai Rusu), thus marking a moment which Mihai Oroveanu recalled thusly: “We lived a moment of emulation, in which Timișoara was an undisputed reference point, a type of moment which hasn’t been repeated as of yet, in my opinion.”