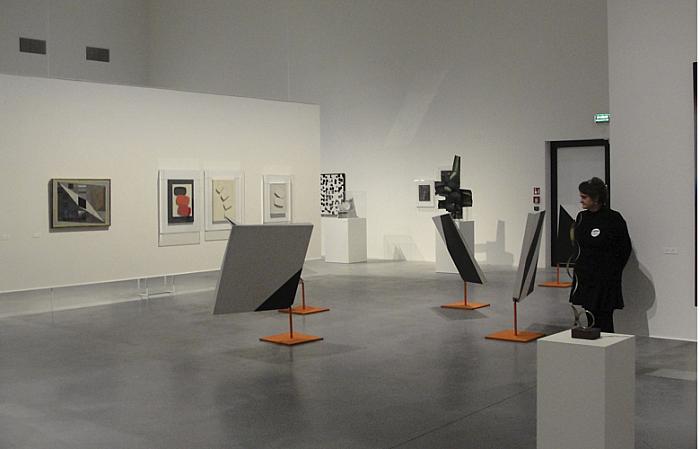 c / The Other Trans-Atlantic. Kinetic and Op Art in Eastern Europe and Latin America

This trend represented both an alternative and a challenge to the critical consensus of mainstream Northern-Atlantic art production: while in the established art centers of Paris, London and New York, abstract expressionism, informel and lyrical abstraction reigned supreme, another art history was being written linking the hubs of Warsaw, Budapest, Zagreb, Bucharest and Moscow together with Buenos Aires, Caracas, Rio de Janeiro and São Paulo. Here arose a network of artistic practices dedicated to an entirely different set of aesthetic questions situated in relation to various shared political and economic realities.

The blossoming of Kinetic art and Op art in those regions was, among others, a manifestation of a fascination with movement – its aesthetic effects and the dynamic opportunities it generated to create new, interactive relations with audiences. These mobile and/or mobilizing objects were frequently created by multidisciplinary teams joining artists together with scientists and engineers, and were rarely conceived as finished masterpieces to be admired by a disinterested beholder but, rather, to be displayed in museums and public spaces as an open invitation to audience interaction and participation. Uncentered, unattached and featuring constantly evolving parameters, these objects were primarily artistic experiments that expressed an earnest belief in the utopian power of art at a precise time when the West’s reigning art ideology had definitively abandoned the idea of utopia as such. In contrast, the South American and Eastern European movements’ fascination with science, new technologies and cybernetics symbolized a continued commitment to building a better future through art.

The exhibition presents works by more than 30 artists and artistic groups from both sides of the Atlantic Ocean, which provide evidence of common interests and intuitions. The exhibition also includes unique archival materials. An English-language collection of texts presented at “The Other Transatlantic. Kinetic and Op art in Eastern Europe and Latin America”, a conference organized in Warsaw in 2016, will be published on the occasion of the exhibition.

The exhibition was organized by the Museum of Modern Art in Warsaw in collaboration with Garage Museum of Contemporary Art in Moscow and SESC São Paulo.