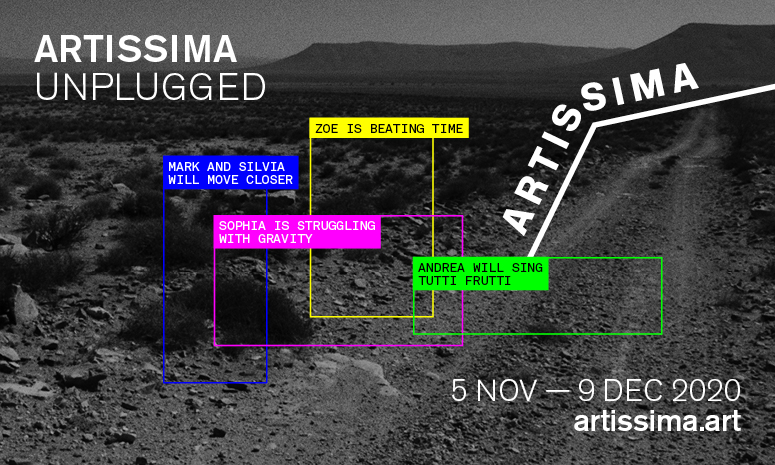 Jecza Gallery is happy to be part of this year #Unplugged Artissima Art Fair, Italy’s most important contemporary art fair.

On one side, the work of artist Genti Korini (b. 1979) works as a linkage between painting, sculpture and photography. The essential element of this metamorphosis consists of a translation in a visually modernist interpretation, approached solely stylistically, by postmodern ideologies and narratives, their materialization in correlated architectural forms. Korini’s theory, developed over the years in relation to architecture, deemed by him, an object of study and great source of inspiration, has roots in the history of his country of origin, Albania, and takes shape as a kind of symptomatology for his ideology’s rapid evolution. His work is strongly influenced by the concept of Frenetic Standstill, according to Harmut Rosa. Korini lives and works in a country that “is changing too quickly for humans to keep up” as Alvin and Heidi Toffler’s futurist book from the 1970s, Future Shock, is stating. Korini finds himself suspended in a world of transition, affected by institutional inertia. The language of modernist abstraction becomes the center of his artistic practice and is often used to comment on ideological contexts, sourced from all the forms that Korini constantly explores and manipulates. Consequently, the viewer’s gaze is forced to explore the migration and reconfiguration of decontextualized forms, as symptoms of social transformations and certain ideologies, although in different ways. The struggle to claim autonomy for the articulation of one’s own space is perhaps the most significant trait of his recent works, situated at half-distance between formalism and social commentary, without belonging to a predefined artistic category. In pictorial terms, the forms that the artist now creates and recreates, using traditional techniques like oil on canvas, are a translation of geometric compositions generated by a computer. Their arbitrary nature comments on the to-and-from, between the real and the virtual, the physical and the digital of post-communist societies, in which the definition of the projection between the surrounding environment and the virtual one becomes confused, even though the real and the virtual are closely connected to one another as is the clash political inertia and social acceleration defining this year’s theme of Artissima 2020.

His painting almost smells of crayon and the remnants of an elaborate construction, which in turn reveal a spiral including whispers of past ideologies and evolving languages.

On the other side, the young Romanian artist Ioana Stanca (b. 1987), whose research is manifested in structures that live through tactile senses. This assumption has spontaneously lead Stanca to extend her attention towards other worlds and focus on different techniques of working with fabric, explored autodidactically. Through this modus operandi, the sewing machine becomes an extension of the artist’s willpower: the possibilities of forming linkages becomes infinite and always surprising, and the machine’s automatism turns into an instrument of exploration and can be used, to also create embroidery, following techniques that are at times used consciously, while at other times, improvised. Right in the middle/in the subject are the performing installations, consisting in general of objectives conceived at a large scale – iron chains and soft sculptures of different forms and dimensions: this scenario explores the various possibilities of interaction that can exist between the human body and weaving, metaphors of intimacy and strangeness. Ioana Stanca’s images and stories follow a particular and intimate mode of relating the studio space with a variety of associations, textures and situations: images with anthropomorphic scissors, female bodies or coils are common in her work, questioning sexual identity, in reference to the complex concept of unity. Ultimately, her most recent works aim at recycling and including recycled fabrics in the production process, emphasizing the enormous quantity of the textile industry.

Both artist engage in different but complementary ways in a dialogue related to the crisis of present days, in a world that has an ever-quicking rate of social change, that paradoxically generates institutional inertia, best described by Harmut Rosa as Frenetic Standstill.

Artissima is Italy’s most important contemporary art fair. Since its establishment in 1994, it has combined the presence of an international market with a focus on experimentation and research. Artissima takes place in an Unplugged version for 2020. A new format, extended throughout the city and online that brings together physical exhibitions and digital projects.

In its physical guise, Artissima will present three exhibition projects in the museums of Fondazione Torino Musei (GAM – Galleria Civica d’Arte Moderna e Contemporanea, Palazzo Madama – Museo Civico d’Arte Antica and MAOMuseo d’Arte Orientale), from 7 November 2020 to 9 January 2021. These shows, sharing the theme Frenetic Standstill and curated by Ilaria Bonacossa, will include artworks provided by most of the galleries selected for the fair this year.

In its digital guise, Artissima will launch two virtual projects. The first is Artissima XYZ, an unusual cross-media platform covering the curated sections: Present Future, Back to the Future and Disegni (online from 3 November to 9 December 2020). The second is the online catalogue, to explore the galleries, artists and artworks of the Main Section, New Entries, Dialogue/Monologue, Art Spaces & Editions (online from 5 November to 9 December 2020).